Who was BKS Iyengar

“To a yogi, the path toward spirit lies entirely in the domain of nature...  Spirituality is not ethereal and outside nature, but accessible and palpable in our very own bodies."    BKS Iyengar 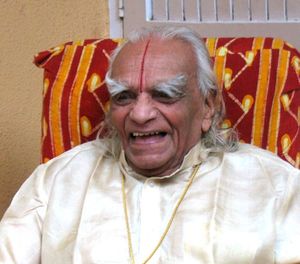 Acknowledged as the modern master of yoga, B.K.S. Iyengar (1918-2014) is honoured around the world for the depth of his understanding and for his unique approach to teaching the art, science and philosophy of yoga. He is the author of Light on Yoga, the most authoritative modern yoga text, Light on Pranayama, Light on the Yoga Sutras, Tree of Yoga, Light on Life and other exceptional reference works.

He taught for more than 70 years, while developing an innovative and inspired method of teaching and practicing yoga, which is now taught under his name. Iyengar yoga is the most widely practiced method of yoga in the world and its principles have been incorporated into the teaching of yoga under other names.

Mr. Iyengar was also a pioneer in the therapeutic applications of yoga to the treatment of numerous medical conditions and physical problems. Medical professionals and researchers in many disciplines and countries have recognized the efficacy of his method. You can find his influence in many forms of exercise, therapy and movement.

He is perhaps best known for his​ revolutionary use of yoga props, which allow students of all ages and abilities to work to their fullest potential while overcoming limitations. B.K.S. Iyengar's approach has made yoga accessible to everyone.

High Teaching Standards
All Iyengar yoga teachers undergo a rigorous program of training. Their knowledge is formally assessed by the most experienced teachers in their national communities. Our senior teacher, Barbara Young, has decades of experience, travelling regularly to India to study with the Iyengar family. For teachers, the Certification Mark (at the top right of the website) demonstrates a commitment to maintaining the excellence and high standards of Iyengar Yoga.

Accessible
Iyengar yoga is accessible to people of all ages and abilities. Regular practice increases flexibility, strength and stamina, of the body, as well the heart and mind. This process allows the mind to settle and a sense of greater well-being emerges.

Safe
Iyengar yoga teaches you how to adapt the practice to your needs, if required. You learn to move with ease in your body while working within your limitations. This makes the yoga postures (asanas) safe to do.

Innovative
BKS Iyengar was a brilliant innovator in the use of props such as blankets, blocks and belts. They are quite often used to improve your understanding of poses or to help if you have limitations.

Progressive
The practice is progressive, building a stable foundation before attempting more demanding work. Beginners start with the basic standing and seated yoga postures and are gradually introduced to a fuller range of postures, including inversions, backbends and arm balances.

Balanced
Each group of yoga postures develops the body in different yet complementary ways and has different qualities: grounding, energizing, strengthening, stimulating, and calming. All of our yoga classes devote time to relaxation and breath awareness. Once the body and mind are strong enough to sit or lie for extended periods without distraction, students learn pranayama (yogic breathing).

Varied
No two yoga classes are the same: teachers sequence postures in different ways to emphasise the various aspects of the practice.

Integrated
Iyengar yoga has been described as meditation in action. Practicing the yoga postures with awareness has an integrating effect and works to harmonise mind and body.

Patanjali is known as the sage who first wrote down the teachings of yoga in his Yoga Sutras. These sutras, organized around the eight limbs of yoga (ashta~eight;  anga~limbs), are at the root of BKS Iyengar’s teaching method.

If this all sounds a little heady, don’t worry – classes will have you moving and stretching your way to freedom, and laughing on the way!
346 Richmond Road, Suite 203
Ottawa, ON K2A 0E8
welcome@pathwayyoga.ca